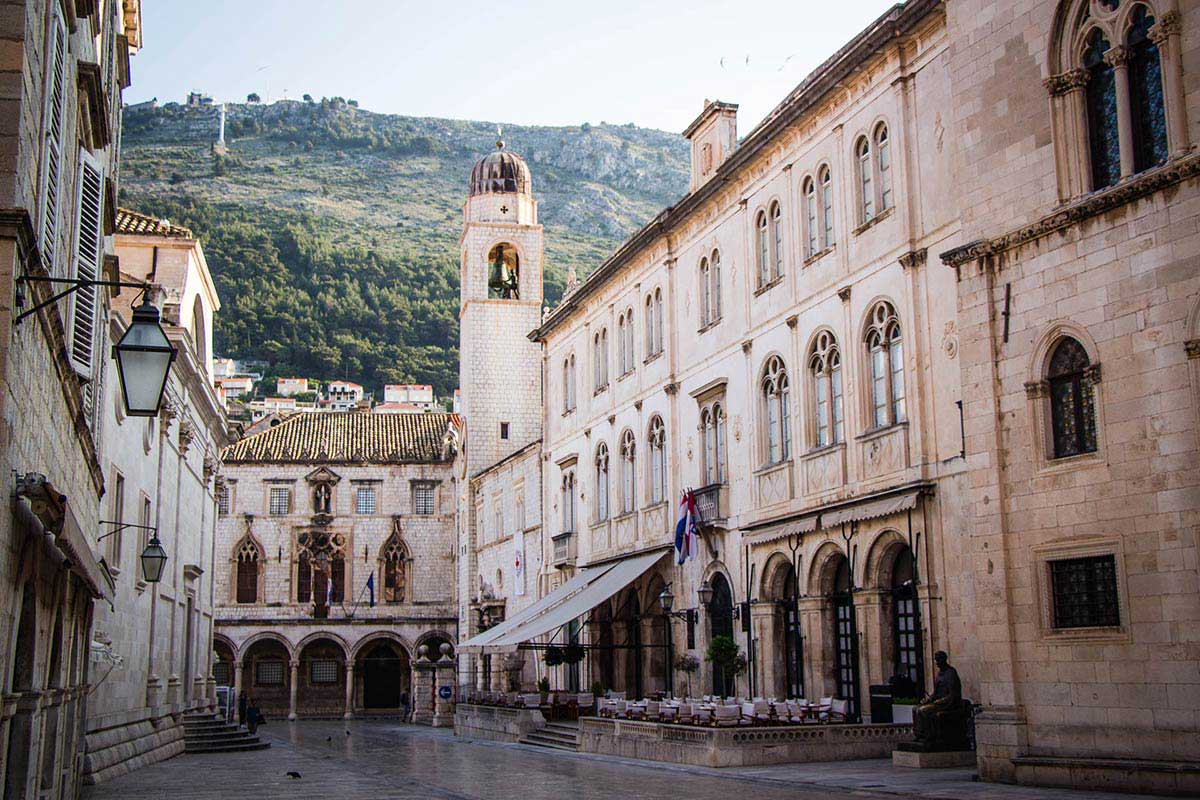 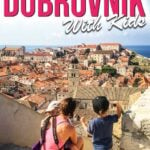 While visiting Croatia with kids, we knew we wanted to include Dubrovnik in our list of places to visit, but we always worry a little bit when visiting a place with as much hype as Dubrovnik. We had visions of multiple cruise ships being there at the same time and walking along the city walls shoulder to shoulder with hordes of tourists. We worried this wouldn’t make for a fun experience in Dubrovnik with kids.

Thankfully, this wasn’t our experience and we had no need to worry – Dubrovnik lived up to its advance billing and we were lucky enough to be there without many cruise ships. To top it off, not only was the city beautiful, the scenery amazing, but there were plenty of things to do with kids in Dubrovnik!

Here’s what we did during our two days in Dubrovnik with kids:

What to do in Dubrovnik with kids

Things to do in Dubrovnik with Kids

If you follow our travels, you know we are the type who love to hike up the mountain wherever there are cable cars. After 2 days in Korcula with kids, we took a ferry ride from Korcula to Dubrovnik. By the time we arrived in Dubrovnik, we were checking into our Airbnb apartment, in the heart of Old Town, late in the afternoon and we didn’t have the luxury of time to hike up Mount Srd.

Instead, we took the cable car to the top. When we arrived at the lower terminal around 2:30PM there weren’t many people in line, so before long we were on our way to the top.

The cable cars have floor to ceiling windows, which were great for our little kids who could enjoy the views without being picked up. The views were pretty amazing, but they didn’t last long as the smooth trip to the top was pretty short. The kids aren’t used to taking cable cars, so they thought it was pretty cool!

At the top, we stopped at many of the viewpoint platforms within the upper terminal. The views of Old Town and the many Croatian islands dotting the Adriatic Sea were spectacular. These platforms are rightfully busy, so we walked down to the lower level to the giant cross and enjoyed the views from there.

Our favorite hiking app showed there were several trails to the north-west of the terminal, so we set out on foot to check them out. Once we passed the Homeland War Museum, we entered a large plateau with trails leading through large, precariously stacked inukshuks.

Before long, the paths start winding around trenches and bunkers, which are remnants of the recent Homeland War. There are many good vantage points of Old Town from this plateau and even if you go no further, it’s worth a visit.

Looking to get your child a camera? Here are the best cameras for toddlers and pre-schoolers who travel!

We continued on and soon found ourselves on a dirt road, with desert scrub vegetation on both sides. The views of the Old Town are gone at this stage, but the views of the mountainous Croatian countryside are equally spectacular here.

We were having a great time walking along this amazing path with barely a soul in sight. The odd dune buggy (rentals available at the terminal) would go whizzing past, but outside of that we were practically alone.

Along the way, we encountered more war remnants including some touching memorials to fallen soldiers. We had to walk carefully past a few cows which had escaped a nearby fenced area on our way to our final destination, the ruins of a military complex from the war. The complex was built on high ground and as such, has excellent views in all directions.

Our kids love exploring ruins and were running around all crazy, when one of the dune buggy tour guides came over and warned us about the poisonous snakes in the area. Needless to say, we picked up our kids and left the complex in a hurry!

We didn’t see any snakes on either leg of the hike, and I’d say this hike is definitely worth it – just keep one eye on the ground when you are walking, just in case!

We began the morning bright and early and took advantage of the nearly empty streets with a self-guided tour of the Game of Thrones filming locations in Dubrovnik.

We started our tour at St. Ignatius Church. The stairs leading down from this church to the square below are where Cersei Lannister began her infamous walk of atonement (Shame! Shame! Shame!). Getting here at 7:30AM had its benefits as we had the place nearly to ourselves.

Next up, we walked past Rector’s Palace, which was the atrium for the Spice King of Qarth. Finally, we walked up Ul. Svetog Dominika, which appears in Game of Thrones as a market in Kings Landing.

By this time the city walls had opened. Based on a tip from our Croatia Lonely Planet, we entered the walls at the Ul. Svetog Dominika entrance gate. This is the best gate to enter the Dubrovnik city walls because:

As for us, the views of Old Town and the Adriatic beyond are spectacular. There were a few Game of Thrones sights along the walls as well (the Minceta Tower is the Qarth House of Undying. Tyrion Lannister commanded his army in the Battle of Blackwater from the walls on the south side near the water).

This is one of the top things to do in Dubrovnik. Just be sure to do it early, and if possible try to do it on a day without a cruise ship in port.

The complete walk around the Dubrovnik City Walls with kids took us about 90 minutes. Afterwards, we treated the kids to an ice cream cone by the waterfront for a job well done.

Please note, you are very exposed to the sun atop the walls so pack plenty of water and make sure everyone has enough sunscreen on. There was only one bathroom up top (on the east side of the walls), so make sure everyone goes before starting the trek around the walls.

If you are visiting Dubrovnik with a toddler, we recommend either a lightweight stroller or a toddler carrier. We always travel with our Lillebaby CarryOn AirFlow, which is made specifically for toddlers.

In the afternoon, we left Old Town and walked to Gradac Park. This small, green park is a short walk west of Fort Lawrence and is a good spot to escape the madness of Old Town. A nice break for parents traveling to Dubrovnik with toddlers!

This park features a modest fountain with turtles swimming in it and a nice walk through some trees with views of the Adriatic all along the way.

For Game of Thrones fans, Gradac Park is where the Purple Wedding feast was filmed.

Here’s more info on Game of Thrones Tours in Croatia.

On the walk back to Old Town, we stopped off at a tiny beach tucked away in the cove west of Fort Lawrence (the “Red Keep” in Game of Thrones). Beach Sulic is not the finest beach in Croatia by any stretch, but was a nice place for the kids to wet their feet and throw rocks in the water on a hot spring day.

It was a good pit stop in Dubrovnik with children, but if you want to spend anything more than 15 minutes at a beach, we’d recommend going elsewhere.

Our planned visit to Lokrum Island with the kids was disrupted by the fact the first ferry doesn’t leave the mainland until 10AM – a full two hours after we start our exploring each day. We originally planned to fill this time by taking the kids to Banje Beach which is a short walk east of Old Town.

We walked slowly at the kids pace, a rare opportunity for them to walk without being rushed. As soon as we left Old Town there was a plaza literally filled with pigeons. Well, that was it – the kids just chased pigeons until we finally had to step in to give the poor birds a break.

While the kids climbed on the cannon in the corner of the square, we looked out over Old Town and we noticed a pathway along the ferry harbor which ends at a small lighthouse. We decided to take the kids down there for a slow walk and have a snack while we waited for the ferry. As our son still needs a mid-day nap, we’re usually always busy when we’re out in the mornings, so this was a nice change of pace for everyone.

The ferry departed at 10AM and a short 15 minutes ride later we were disembarking on Lokrum Island. The boat ride itself was a fun activity in Dubrovnik for kids.

Lokrum island is a nature preserve with pathways running along the coast and through its forested interior. It’s the perfect day trip from Dubrovnik with children.

Tip: Wear proper footwear as flip flops won’t cut it on these paths. We know from experience!

We have an entire post full of all our best tips for hiking with kids and this one with all the best hiking gear for kids.

For attractions, there is a small, inland salt lake (the “Dead Sea”), the ruins of a 12th century monastery, a fort atop a hill, and the Iron Throne. Yes… that Iron Throne. The producers of the show sold the Iron Throne to the city and it is now on Lokrum Island. Most blog posts you will read will say it’s in the Visitors Center, but currently it’s housed in the Monastery complex.

The kids loved the wild peacocks and rabbits which freely roam the island. The peacocks are everywhere and the kids couldn’t get enough. The rabbits are mostly in the park near the center of the island, but the kids were more interested in the small playground there.

We spent our time enjoying a nature walk, letting the kids enjoy the peacocks and just soaking in the feeling of relaxation which is so obviously missing back in Old Town. This was the last day of 6 weeks in Eastern Europe and we wanted to just enjoy the experience and not rush anything.

It was perfect… For families wondering what to do in Dubrovnik, this was a nice change of pace from Dubrovnik Old Town.

Driving from Dubrovnik to Split? This post will inspire you to drive up the Peljesac Peninsula!

We are grateful to Dubrovnik Tourist Board for their generosity during our visit. All opinions are our own.

Additional Places to Visit in Croatia with Kids

Planning Resources for Dubrovnik with Kids

Whether it's spending a week on a beach, taking a city break or climbing a mountain, you will find inspiration for your next trip here!
READ MORE

Scroll back to top
326shares
We use cookies to ensure that we give you the best experience on our website. If you continue to use this site we will assume that you are happy with it.OkPrivacy policy