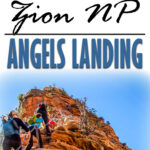 I knew from the start that going to Zion National Park with kids would likely mean that hiking Angels Landing was out of the question. But I just couldn’t get it out of my mind. I wanted to find a way to hike Angels Landing, even if was just to Scout Lookout.

I spent an entire day thinking about all the different ways we could do this hike, but in the end I knew that I would either hike Angels Landing by myself and leave the kids with my husband or not do it at all.

With a healthy fear of heights, heHe had no interest in the Angels Landing hike, nor did he really want to sit up at Scout Lookout while I finished it. After being there, I don’t blame him – wrangling these two up to Scout Lookout (and away from the edges) solo wouldn’t have been fun.

I felt incredibly guilty leaving him for the day with the kids to go off and do my own thing. After all, this road trip in Utah with kids was about experiencing the Mighty 5 – Utah’s National Parks – with kids.

But in good husband fashion, Dan insisted I take a day to myself and go do something that I really wanted to do. The same way I insist he does things he really wants to do when we travel (like see the Game of Thrones exhibition in Belfast). We both agree that if it is something we would regret not doing, then we need to take those opportunities.

After humming and ha-ing about it, I finally decided to hike Angels Landing solo. I was nervous! I’ve done one, maybe two hikes, without kids in the past 6 years. Most hikes are at a kids pace these days, which isn’t fast.

I started to question myself…Would I be able to do it? There’s no doubt Angels Landing would be a hard hike.

What about the heights and chains on Angels Landing? I don’t have a fear of heights, but hiking Angels Landing solo would mean no support.

Add to all the nervousness about hiking Angels Landing that I have never hiked solo. But I also believe in doing things that scare me, so with my family’s support I was going to do it.

To minimize the logistical problems with driving to the Zion Visitor Center and leaving my husband without a car, we made a plan that we would all go together in the morning and take the Zion shuttle.

I would get off one stop early to hike Angels Landing while my husband would take the kids to do a couple more of the kid friendly trails in Zion NP.

What is Angels Landing?

The Angels Landing trail, cut into a 1,488 tall rock formation, takes you along narrow sections called the Hogsback with incredible steep drop offs all the way to the Angels Landing summit. There are chains bolted into the rock to hang onto along these precarious parts of the trail.

Who Should Attempt the Angels Landing Hike?

After having done it, I can say that anyone in average physical condition should be able to hike Angels Landing, however please don’t attempt it if you have any fear of heights. This hike is more about your mental capabilities than physical.

The most physically challenging part of the Angels Landing hike is the 21 switchbacks called Walter’s Wiggles, but even this section is not that difficult.

How to Get to Angels Landing Trail

It’s approximately a 25 minute drive on the shuttle from the Zion NP Visitor Center to the Angels Landing trailhead.

How Long is the Angels Landing Hike?

The Angels Landing trail is a moderate 2.5 miles one-way (4 kilometers). The total return distance of this exciting Zion hike is 5 miles (8km)

How Steep is the Angels Landing Trail?

There are some flat sections along the Angels Landing Trail, but overall this is a very steep hike with 1,488 feet of total elevation gain. The Walter’s Wiggles section of trail features 21 switchbacks up to Scout Lookout

How Hard is the Angels Landing Hike?

This iconic Zion hike is difficult, but anyone of average physical shape should be able to complete this hike.

How Long Does it Take to Hike Angels Landing?

It took me 3 hours to complete the Angels Landing hike, but average is 4-5 hours.

This epic Zion hiking trail starts out relatively flat and even paved for a majority of the ascent up to Scout Lookout, so if they are in decent shape, you could hike a large section of Angels Landing with kids.

Do not attempt the section past Scout Lookout with kids.

Make sure to stop use the restroom when you arrive at the Grotto trailhead. There are toilets at Scout Lookout as well.

You start hiking to Angels landing from the Grotto trailhead. It starts out relatively flat and the trail will take you into the shady and cool Refrigerator Canyon (not just a clever name). From there you’ll climb Walter’s Wiggles (21 switchbacks) up to Scout Lookout.

From Scout Lookout is where the fun really begins. You’ll be hiking along the narrow ridge with steep drop-offs, climbing up section and holding on to the chain as you make your way to the Angels Landing Summit.

As I mentioned before, my biggest fear about hiking Angels Landing is that I wouldn’t be able to do it or that I might panic somewhere along the trail. Which is a bit silly in hindsight since that’s never happened to me, but I’ve never hiked a trail like Angels Landing nor had I done a solo hike.

I was confident that I was physically able to do it and that it would be a mental game. Knowing that I had two little ones who would want a full report was always at the back of my mind too. So I had no intentions of giving up.

I’m a fairly fast hiker (or at least I used to be) and I’m also accustomed to hiking with a kid on my back or by my side, so getting to hike on my own at my pace felt amazing! I tried to stop and take pictures, but I really just wanted to hike.

We were on the Zion shuttle at about 8am and the start of the Angels Landing trail was still pretty quiet. I was on my own or passing the odd group of people all the way up to Scout Lookout.

The wonderful thing about the Angels Landing hike is that it’s beautiful right from the get-go as you cross the Virgin River and start the climb up. It’s in the shade to start in the morning, so enjoy being cool. It won’t be for long as you start having to shed layers when you start the ascent.

From there you’ll enter Refrigerator Canyon before you start up Walters Wiggles. Walters Wiggles is a series of 21 switchbacks. It sounds intimidating, but it’s really not that bad. They are so short and you get through this section pretty quickly.

Once up at Scout Lookout, you can use the restrooms one more time before doing the Angels Landing section. You’ll also start to see crowds of people gathering here

After Scout Lookout is where the fun really starts to happen. This is where you start hiking along the edges with chains. Right from the start I was following a group of people. This is where patience needs to set in. If someone ahead of you is struggling you just need to wait.

There are a few spots where people can move to the side to let others pass but for the most part, you’ll be hiking in a line all the way to the top of the Angels Landing summit.

It can get a little scary when people are coming back down the Angels Landing trail and trying to squeeze through, but overall people were extremely courteous on this trail.

Sometimes you need to wait for large groups to pass by before you can continue hiking up, but with such incredible views of Zion Canyon you won’t mind stopping for a minute or two to take it all in.

Since I was hiking Angels Landing on my own and I was hiking when there were a fair number of people on the trail, I don’t have a lot of pictures. That’s not a bad thing as I really got to enjoy the experience.

On the way up to the top of Angels Landing, I was following a continuous line of people. We climbed up the sandstone steps holding on to chains with the most epic drop offs to our side. We used the chains to pull ourselves up and over the large boulders.

There were a few sections that were more nerve wracking as the Angels Landing trail narrowed but as I continued on the trail it felt less difficult. I think this is mostly because I was feeling more confident in hiking with the chains and that I would be able to do this.

At the top of Angels Landing, I took a few minutes for that incredible view from the top I had been seeking. I watched as a couple got engaged, ate my granola bar, asked a stranger to take a picture of me, then went along my way back down the trail.

The two craziest things I saw on the trail to Angels Landing? One guy trying to run down it. Why?

And another holding a coffee… I recommend you carry all your stuff in a backpack and leave your hands free! There were several times when I needed both hands to climb up a large boulder or hold on to the chains.

This is a busy trail, no doubt about it, and I expect my experience was not seeing it at its worse. I was surprised that on my way back, I had large sections of the trail where there were only 3 or 4 of us that were on it at one time. We’d have to pause for groups going the other way, but we didn’t experience any real congestion until the very beginning portion.

Once I was back at Scout Lookout, the hike back down was a piece of cake! There’s no more climbing and you ride the sense of accomplishment all the way down.

I took the shuttle bus back to the Zion National Park Visitor Center and started up the Pa’rus Trail, assuming I’d find Dan and the kids along the way. They were pretty surprised to see me so soon!

Other kid-friendly Zion Canyon hikes you may enjoy are: