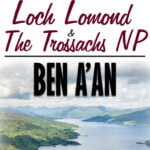 Ben A’an is one of the most popular peaks to climb in the Loch Lomond & The Trossachs National Park. In a land of long distance hikes like the West Highland Way, Ben A’an is a rare short hike in the Trossachs which offers incredible views of two lochs from the summit.

The Ben A’an walk is reasonably short, but it begins and ends with strenuous uphill sections. The two uphill sections of this hike are through beautiful forests, filled with birdsong and wildflowers; showy purple foxgloves seem to be growing everywhere along the side of the trail.

The flat section in the middle is a nice break from both the hard climb up from the carpark and from the steep descent down from the summit. This portion of the trail offers nice views of the surrounding countryside, mainly due to the fact all the trees have been cut down.

At first we thought the cut trees seemed a bit unsightly, but it turns out that all the trees that were felled were non-native trees in an effort to allow native trees to repopulate the area. So, just ignore the fallen trees for now and enjoy the scenery this little bit of clean-up has made possible.

The final ascent to the top is a bit of a grind. Once the flat section stops, the stairs begin and they don’t stop until near the Ben A’an summit, 461m above sea level. The effort is well worth it though as the views from the summit are incredible.

There are two large rock formations at the top (one is slightly higher than the other, thus being the official summit) and lots of room for hikers to spread out, relax and enjoy the views.

From the summit of Ben A’an you have earned views of not one, but two lochs: Loch Achray (the smaller one by the car park) and the much larger and longer Loch Katrine. The combination of the two lochs, surrounded by the other peaks of the Trossachs is simply spectacular.

Elevation Gain: As mentioned above, there are two extended uphill sections to this hike which are a pretty good workout. In the first 0.6 miles / 1km from the parking lot, you climb 560 feet / 170m. The final 0.4 miles / 0.7km of the hike is the steepest section, where you climb another 490 feet / 150m to the top.

The elevation gain on Ben A’an is actually slightly less than on Conic Hill (another outstanding hike in the Loch Lomond and Trossachs National Park), but you climb it in less distance, making it steeper.

Difficulty: Despite being a short hike, we’d rate Ben A’an as “hard”, due to the amount of effort it takes to climb the uphill sections. That said, our 3 & 5 year old kids hiked to the summit of Ben A’an by themselves, but slower than usual due to the increased effort.

Ben A’an is popular with families and we saw many other kids also hiking to the summit themselves, so it can be done by anyone in reasonable shape and/or a good amount of determination.

Duration: The Ben A’an hike took us 2 hours and 45 minutes to complete, which is much longer than their typical pace (which would have been around 2h15m). The slower pace is due to the steeper incline and the higher effort level required. Without kids, we could have completed this hike in about an hour.

How to Get There:  Ben A’an is close to Aberfoyle in the The Trossachs section of the national park. There is a decent sized parking lot, which was full by midday. Note, there is a £3 fee for this parking lot, payable in coins only – no bills or credit cards.

Where to Stop for Lunch or a Break

There are several spots near the top where you can plop down for a nice break but save your lunch for the top. There are tons of places to sit and enjoy the incredible views you’ve earned.

You see the word “Ben” a lot in Scotland. It’s derived from the Gaelic “beann”, which means “peak”.

What to Bring on Ben A’an

The trail surface on this hike alternates between smooth gravel and steps made of stone. A good pair of shoes is sufficient for this hike, but real hiking shoes would be better.

More Resources for Scotland with Kids