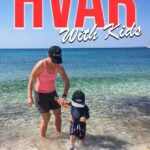 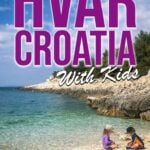 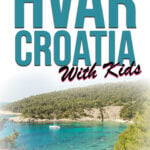 Hvar, Croatia has a well-deserved reputation for being a chic, jet-setting party town. As parents of two small kids (aged 2 & 4), we are not exactly party animals and weren’t sure if visiting Hvar with kids was the right choice for us. We knew Hvar would be beautiful, and it was well connected by catamaran to our other Croatian destinations, so we decided to take a chance and add Hvar to our family vacation to Croatia. We’re glad we did!

After a spectacular week on mainland Croatia, with stops in in Zagreb and Split with kids with a 2-day stop in Plitvice Lakes National Park with kids, we were ready for some family fun on a beautiful Croatian island on the many stunning Hvar beaches!

If you are planning a family vacation to Croatia and are considering visiting Hvar with kids, we have many suggestions for the best things to do in Hvar within this post.

5 Fun Things to do in Hvar with Kids

The Hvar Fortress (otherwise known as Fortica or Spanjola) is one of the first things you see when you arrive in Hvar. Sitting dominantly on a hill behind the Old Town, the Hvar Fortress must have been formidable back in its day.

To get to the Hvar Fortress requires walking up a series of steps from Old Town. Once you cross the road called Ul. Higijeničkog Društva, you enter a park through a gate, where the stairs graciously end and the path becomes paved leading gradually uphill.

The walk up to the Hvar Fortress is very enjoyable with with many beautiful plants & flowers and excellent views of Hvar Town and its harbour. It’s an effort, but if you are in reasonable shape, you won’t have much trouble. Our kids were able to walk all the way to the Hvar Fortress without much help.

The Fortress was one of our kids favorite things to do in Hvar. They had a ball running around exploring, climbing on stuff, playing with the cannons, etc. The views at the Hvar Fortress are incredible and make the walk up worthwhile.

The views of Old Town and the Adriatic Sea are why you visit the Hvar Fortress, but there are a few other things to do while up there. The Hvar Fortress has a prison deep in its bowels which is fun to walk down and explore. There is also a small museum (mostly ceramics – yawn) and a cafe which sells ice cream and smoothies.

The Hvar Fortress is a reasonably small place and you can see it all in under an hour, but you can take as long as you’d like to soak in those amazing views of Hvar and the Adriatic Sea beyond. If you are wondering what to do in Hvar with kids, we recommend taking the time to see the Hvar Fortress.

See the Hvar Fortress on a Hvar City walking tour.

We left our Hvar vacation rental at 7:30 am to go for a family hike to a popular beach near Hvar Town. We put the kids in their carriers and headed out on our morning hike to nearby Milna Beach.

We knew the hiking on Hvar would be amazing but the hike to Milna Beach is one of the most beautiful hikes we have ever done. This amazing Hvar hike hugs the rugged coastline nearly the whole way, offering amazing views of the Adriatic Sea and the surrounding islands.

Before long you begin walking on an actual hiking trail, through trees which provide some much needed shade from the southern exposure of this Hvar Island hike. The quality of the hiking trail varies quite a bit from flat dirt to jagged, uneven rocks, so it’s best that you wear your most robust footwear on the Hvar hiking trails (flip flops will not cut it on this hike).

Along the hike to Milna Beach, you’ll pass several other beaches, many of which were deserted on the day we hiked this trail. It’s hard to describe the tranquil beauty of these isolated Hvar beaches, with their stunning crystal clear water.

It was a hot morning and it was soooooo tempting to stop and jump in, but we had heard Milna Beach was a good kid-friendly Hvar beach, so onward we marched. We let the kids walk for a little bit, but we carried them for most of our hike to Milna Beach as we wanted to give them as much time on the beach as we could.

As we neared Milna, we passed a couple stunning Hvar beaches and we were getting excited to see the one nearest town, which was our final destination. When we finished our hike to Milna Beach, we were shocked to see a backhoe in the middle of the beach, grooming the pebbles. Groan…

We visited Hvar with our kids the first week of May, so they must have been preparing Milna Beach for the upcoming tourist season. Even after being grooming, Milna Beach wasn’t nearly as nice as any of the others we’d passed, but the kids didn’t care and they ran off to play. We were quite disappointed knowing the amazing, almost secret Hvar beaches we had passed up to come here.

Being so early in the tourist season there was hardly anything open, but we went to a nearby Milna hotel for some ice cream and cake.

Then we walked back to the second closest beach to Milna, which was significantly nicer than Milna Beach – it even had a section of real sand beach, so everyone with small kids congregated there.

The hike to Milna Beach was not too hard, with very little vertical gain, but the footing was challenging at times and slowed us down. The 4.7 mile (7.5km) hike took us about 2h 15m, about a half-hour longer than this distance would typically take us.

Given the hike to Milna Beach took us longer than planned, we abandoned our plan to hike back and took a taxi back to Hvar Town.

We recommend you stop at one of the other excellent Hvar beaches on the way to Milna, instead of going to Milna Beach. When you are done enjoying your special Hvar beach, complete the hike to Milna and take a bus or cab back to Hvar Town. The beaches in Milna are nice enough, but the ones along the hike there were much nicer.

After our toddler’s nap, we went for a slow walk through Hvar Old Town. We didn’t push the kids too hard and let them set the pace. We walked through many of Hvar’s charming side streets behind the harbor.

The kids liked running ahead exploring, smelling flowers, climbing stairs, finding new alleys, etc. We walked back through Saint Stephan Square before looping back up to our Hvar vacation home rental.

Taking a water taxi out to the Pakleni Islands for fun on the beach is one of the top things to do in Hvar, but we elected not to visit Pakleni Islands with our kids for two reasons:

2) We started our day at 7:30am and we doubted there would be any water taxis to the Pakleni Islands operating that early in shoulder season.

So, we decided to guarantee ourselves an awesome beach day by hiking to Mekićevica Beach – the most beautiful beach we saw on our hike the previous day. It took us an hour to walk from central Hvar to Mekicevica Beach.

(Side note, Google Maps directed us to walk through the residential part of town as a more direct route. It was way less scenic than the waterfront route we took the day before and didn’t save us any time. We recommend you walk to Mekicevica Beach via the waterfront route).

We arrived at Mekicevica Beach at 8:30 and we had the entire beach to ourselves. This small Hvar beach is postcard worthy – it’s exactly what comes to mind when you think of a Croatian beach.

Mekicevica Beach is in a protected cove with dramatic rock formations on either side. The beach itself is mostly rocks, with small pebbles close to the water and get increasingly bigger as you go back. We recommend water shoes for anyone with tender feet.

There are many benefits to visiting this beautiful Hvar beach for families with little kids. Mekicevica Beach is in a well-protected cove, so the waves tend to be small. Being more remote, Mekicevica Beach will be less crowded than the beaches closer to Hvar – we had the beach to ourselves for almost two hours.

Our kids spent most of their time at Mekicevica Beach outside the water, playing on the large outer cove rocks, playing with the beach rocks, looking for shells, playing in tide pools, etc. Despite being common in Croatia, we didn’t see a single sea urchin here (keep an eye out for black circles in the water).

When it was getting close to lunch, we decided to walk back to Hvar Beach and let the kids play there for a while. Being much closer to town, Hvar Beach was much busier and didn’t have a fraction of the charm of Mekićevica Beach.

We played for a little bit, but it was getting close to lunch and we were tempted by the prospect of seafront calamari at the nearby Mustaco Restaurant. You can keep walking – we thought the food here was awful.

In the afternoon, we could tell the kids were dead tired after two days of playing in the sun on the Hvar beaches, so we decided to keep them at home for the afternoon, while Celine and I took turns going for a walk.

We each walked for 20-25 minutes down the Hvar oceanfront promenade on the west side of the harbour. This is a very nice family friendly walk on Hvar Island. It passes several beaches and a playground, making it one of the top things to do in Hvar for kids.

Where to Stay in Hvar with Kids

Due to its popularity, accommodation in Hvar can get very expensive. Hvar Old Town is pretty small and hotel options are limited, forcing prices upwards. Those traveling to Hvar on a budget can find options just outside of the Hvar Old Town, but this typically involves climbing many stairs up the hill which backs onto Hvar.

There are plenty of kid-friendly vacation home rentals in Hvar Town.

If hotels are more your style, we personally use and recommend using Booking.com as their Top Picks for Families search filter makes it easy to find good family-friendly accommodation.

How to Get to Hvar with Kids

Hvar does not have an international airport, which means most visitors will travel there from Dubrovnik to Hvar or from Split to Hvar.

We traveled from Split to Hvar on the Krilo passenger ferry. We chose to take a ferry to Hvar with kids as we didn’t have a rental car and the Krilo ferry offers direct service to Hvar Town. The other ferries to Hvar Island drop you off at Stari Grad, which is a 30 minute drive to Hvar Town.

If you are arriving at the Split airport or the Dubrovnik Airport and wish to get to Hvar Town without needing a rental car and/or the need to bring child seats, check out a private transfer with Suntransfers.com.

Your private transfer to Hvar includes transportation to the ferry, child seats (if requested) and ferry tickets. Plus, your driver will meet you at the airport gate with your name on a sign – who doesn’t love that?

Up next, we hop on a ferry from Hvar to Korcula with kids!

Read more about our European family vacation with stops in the Czech Republic with kids, Budapest with kids, Croatia with kids and a final stop in Iceland with kids.