8 Tips to Encourage your Child to Ride a Balance Bike 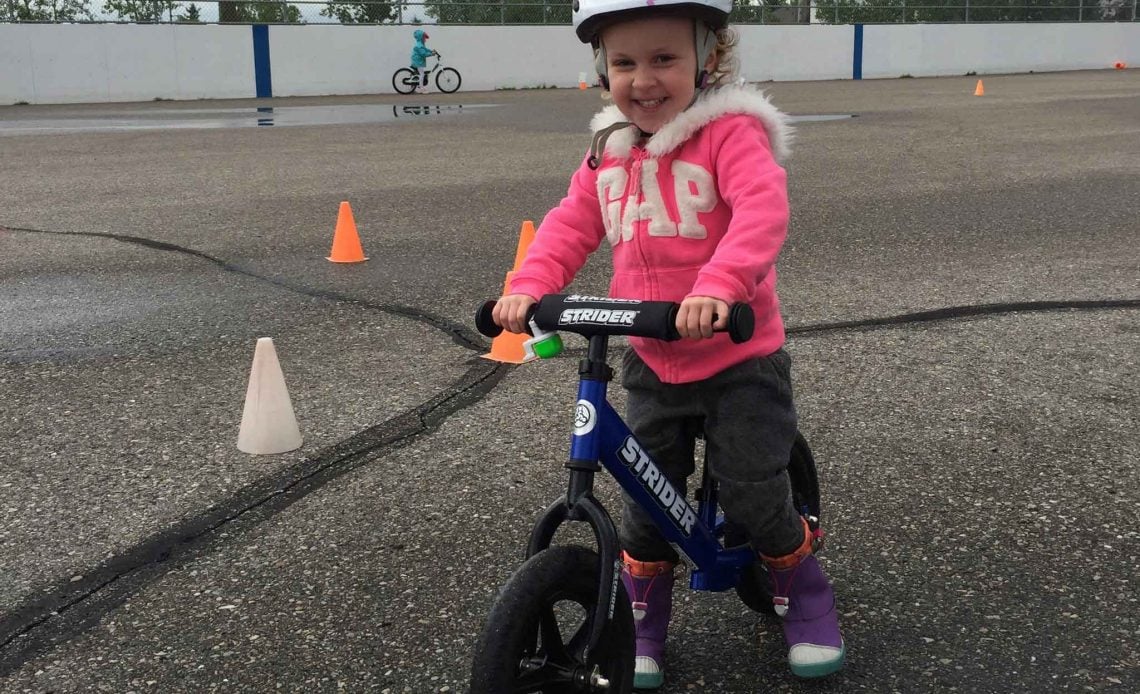 Being active outdoors is extremely important to both my husband and I.  Having kids can certainly make that more challenging at times.  What we are especially passionate about is active travel, but before we can do more of that with our kids we need to ensure they are up for it.  We want to encourage our kids to be active outside without pushing it too much.  We want it to be something they enjoy and want to do.

One activity we have always enjoyed is being on our bikes.  We have also found this to be one of our favourite ways to explore when travelling.  For this reason, we knew we’d want to get our kids bike riding as soon as possible, so we bought our daughter a balance bike around 18 months.

Since it was winter time, we brought it in the house so she could begin to explore using it.  Our intentions were to let her lead with it and hopefully be riding it by the time she turned two in the summer.  This never happened.  She really didn’t have a lot of interest in it.  Even taking her out with other kids (of the same age) who were riding theirs didn’t increase her interest in it for more than 5-10 minutes.

We brought it back in the house in the winter again to see if she would be more interested in it.  The following spring I would take it with us on walks, but she never lasted more than a block or two on it.  Again, I tried play dates with other parents who would bring their kids with bikes.  That usually ended with both kids not riding.  I’d see other parents with their kids cruising along on balance bikes and always ask how they got them to that point.  From everyone that I talked to here’s what I’ve gathered…

So here I was early June and still hadn’t gotten her that interested in her bike.  I was really trying to be gentle in my encouragement.  After hearing comments “Just be patient, something just changed at 3 years old” and “He always wanted to go to the playground, so I took him but he had to ride his bike there”, I decided to sign her up for a bike camp.  To get the most out of the bike camp, I wanted her to at least be able to glide a bit on her balance bike.  I came up with a plan.

Being summer meant it was much easier to get two kids out the door and my little guy was getting more consistent in his morning routine.  I in turn was going to be consistent and take us out every single day right after they both had breakfast.  We did it consistently for a couple of weeks, then it just became our normal.  Some days we went out in our PJs, but we were out.  Not only that, but after a couple of months she will no longer go for a walk with us, she rides her balance bike.  She asks to ride it all the time.  We’ve even gotten to the point where we all ride our bikes together, albeit slow but it makes me so proud to be riding with her by my side saying “Mommy, I’m having so much fun!”.  I will slow down to a snails pace to hear those words from her!

Consistency was definitely the most important part of my plan, but what helped me was having a hard deadline (bike camp) to help keep me disciplined.  Here are some of the other tricks that worked with my daughter when she needed encouragement:

Bring “someone” along for the ride

When we started out riding each day, my daughter would always ask to bring along a dolly or one of her stuffed animals.  I would zip it into her hoodie so it could go for a ride.  Throughout the bike ride and at the end, I would use the stuffed animal to tell her how good she did and how fast she was getting.  She loved this so much that she started telling me the day before who she was going to bring with us.

Talk about the rules

In the first week, I made up a list of the “rules” for riding her bike.  I would repeat them and ask her about them daily.  She liked being able to list them for me and I feel like this played a big part in building her confidence which resulted in getting her from walking her bike to actually gliding.  Our rules were: bum on the seat, two hands on the handle bars, keep the handle bars steady and watch where you are going

I would run up ahead and take videos and pictures of her riding, then I would show them to her and my husband that night.  She enjoyed seeing them so much that she started telling me to run up ahead.

I started with a very small loop close to our house that had a very slight incline.  At the beginning, we would only do that short loop and go home.  This was enough for her and it took us 45 minutes because she wanted to stop so much.  I would ask her if she wanted to go further, but initially the answer was always “just the short loop then we go home”.  Eventually, she was doing this loop in 15 minutes.  The small incline was perfect because she started to get a sense for gliding down it.  This was her favorite part.

As she got better on her bike and especially on weekends, we would take her to a playground as a reward.  Since I still had a baby to deal with, my husband was able to stay longer with her and I would just take the baby back for his nap.

Give time to stop and explore

Especially early on, it was important to just let her stop and explore.  Honestly, some days were painfully slow and we still have days like that.

If I kept things happy and high energy, as opposed to being impatient, she was so much more likely to go faster and stop less.  Toddlers/Preschoolers have this tendency to just move slower when you want them to speed up!

Making up games to play instead of asking her to hurry up also has much better results. If we want her to move, we just make a game of who’s faster to get up the hill or who can run(ride) up ahead and hide.

Use encouraging words and actions

As she started to go faster, I would make a big point of putting on my runners instead of flip flops, because I had to keep up with her.  I would even do a slow jog to show her I was running.  She loved this and would even check my feet before we left the house to see what I was wearing.

Best Things to do in Killarney National Park with Kids

Cycling the Gap of Dunloe with Kids

We use cookies to ensure that we give you the best experience on our website. If you continue to use this site we will assume that you are happy with it.Ok